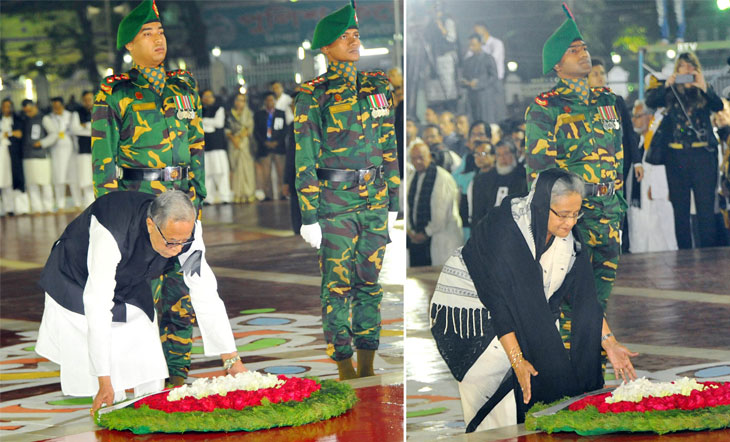 United News of Bangladesh :: President Abdul Hamid and Prime Minister Sheikh Hasina on Tuesday paid their homage to the martyrs of the historic Language Movement by placing wreaths at the Central Shaheed Minar at one minute past midnight on the occasion of Amar Ekushey and the International Mother Language Day.

President Abdul Hamid and Prime Minister Sheikh Hasina proceeded to the altar of the Central Shaheed Minar together in a slow pace as the immortal song on Amar Ekushey—’Amar Bhaiyer Rakte Rangano Ekushey February’– was playing.

They stood in solemn silence for some time as a mark of profound respect to the memories of the Language Heroes.

Ministers, advisers to the Prime Minister, parliament members, the chiefs of the three services, diplomats, senior Awami League leaders, high civil and military officials were present on the occasion.

On his arrival at the Shaheed Minar, the President was received by Prime Minister Sheikh Hasina and Vice Chancellor of Dhaka University Prof Dr AAMS Arefin Siddique.

Flanked by cabinet members and senior leaders of the party, Sheikh Hasina, also the President of Bangladesh Awami League, later placed another wreath at the Shaheed Minar on behalf of the party.

BNP chairperson Khaleda Zia together with her party senior leaders also placed wreaths at the Central Shaheed Minar around 1:30am, putting an end to speculation over her attending.