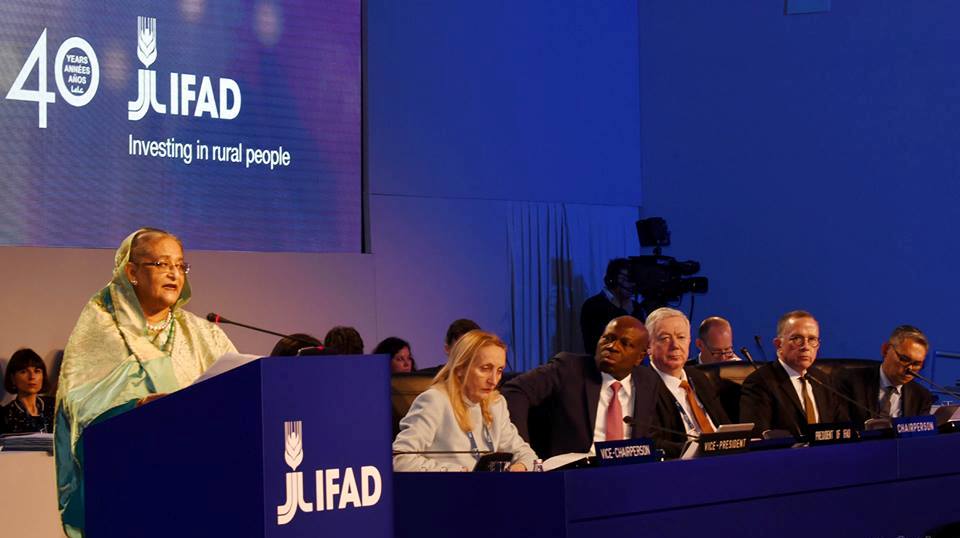 BSS :: Prime Minister Sheikh Hasina today said enhanced investment in rural economy under a global partnership was a key factor to fight poverty as she presented her key-note address at the council meeting of IFAD, the UN’s specialized agency on agriculture.

“We believe that in order to ensure resilience, investment in rural economy is a key factor. This, we believe, cannot be achieved without global partnership and cooperation,” she told the 41st Governing Council Meeting of the International Fund for Agricultural Development (IFAD).

The Bangladesh premier asked the development partners to be “a little more generous” to eliminate poverty and hunger as “the world appears to me to be ready now for it”.

The premier said sustainability could not be achieved without creating long-term resilience while a comprehensive sustainable rural economy “requires investment in the development of the rural social fabric and climate resilience”.

She described the IFAD’s model of mutual help and partnership to be “very different” from that of other UN agencies and organizations and “we hope and pray that in continuing such a partnership, IFAD will play an important role”.

“And we sincerely believe that this ideal model will work in the promising future that is before mankind now,” Sheikh Hasina said.

She also expected the development partners continued cooperation with Bangladesh as they “came forward with eager and generous hands and jointly we made proud progress”.

The premier sought their effective support to help realize Bangladesh’s goal to be a middle income nation by 2021 and developed one by 2041.

Sheikh Hasina said she always tried to plead for sustainable rural economies through investments to develop people’s resilience as it worked in Bangladesh as the country “has been very lucky with stable governance for almost a decade”.

“We have formulated our strategy of socioeconomic growth very carefully over a period of about four years. And then we tried to implement it in the last nine years . . . we made adjustments as needed and as demanded by circumstances very carefully,” she said.

Sheikh Hasina said despite being dubbed as a fertile land for centuries, Bangladesh reputation was marred time and again for a long period till late 1990s while during its turbulent 1971 emergence it faced serious food shortage as the yield then was only 11 million tonnes of grains for 75 million people.

Soon after the independence, she said, Father of the Nation Bangabandhu Sheikh Mujibur Rahman laid utmost importance on increased agro production calling for the ‘Green Revolution’ by taking some pragmatic measures like revised land ownership and management system, relaxed land tax and launching of research bodies.

The premier recalled that nationwide installation of irrigation pumps and free distribution of agro-inputs started yielding a great success but after his 1975 assassination the agricultural sector was exposed subsequent governments negligence, resulting in acute food shortage.

“Every year for a decade and a half it (Bangladesh) had to assemble development partners for at least four times a year to meet its food needs,” she said.

The premier, however, appreciated IFAD role for boosting Bangladesh’s agriculture yields saying since its inception the speciliased UN agency invested in 31 projects involving US$ 680 million while another five were in the pipeline.

“Currently IFAD is focusing on the adaptation of rural livelihoods to climate change and the scaling up of successful approaches,” she said.

But she feared the future global scenario in terms of yield as a World Economic Forum report predicted the global population to surpass 9 billion by 2050, half of them being the middle class, while the climate change phenomenon could complicate the situation.

“There will be a huge strain on declining global arable land, forests and water” as the rise in sea-level would heavily reduce arable land in many countries and “we 9Bangladesh) will be its victim again without contributing to sea level rise at all”.

“How do we respond to such a combination of adverse developments? I shall tell you the story of agricultural growth of my country pointing out the lessons which can be adopted or more appropriately adapted in other countries for human development on a global scale,” she said.

“We don’t want to face another 1981 when we discovered that neglect of agricultural growth was most unfortunate for mankind” though Bangladeshis natural resilience to any crisis did not allow the build-up of a food crisis in a year of climatic vagaries and reduced food production in the country, Sheikh Hasina said.

She said the resolve of Bangladeshis to tighten the belt, encounter difficulties with confidence and seek alternative ways of meeting the crisis enabled us to overcome and succeed. 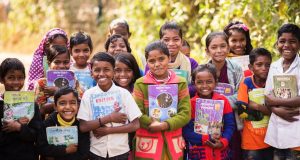 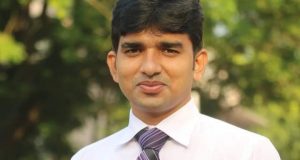 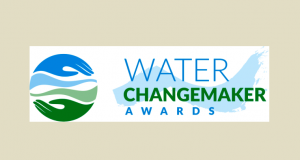 Dhaka ::  The global development and humanitarian organization Educo has been ...