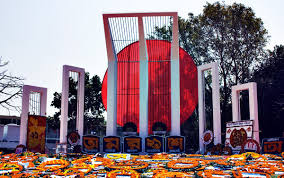 News Desk :: A Webinar on ‘International Mother Language Day 2021’ was jointly organized yesterday by the Embassy of the People’s Republic of Bangladesh, Jakarta and UNESCO Office, Jakarta highlighting the theme of this year ‘Fostering muhilinguulism for inclusion in education and society’. The Embassy organized the event as a part of the observance of ‘Mujib Year’ to highlight Bangladesh abroad. There was participation from Ministry of Foreign Affairs and Ministry of Education and Culture and government officials of the Republic of Indonesia, UNESCO representative, officials from Ministry of Foreign Affairs of Bangladesh, academicians, local media representatives, Diplomatic Missions in Jakarta and Bangladesh Missions abroad joined the webinar. This was the first such initiative of the Embassy in disseminating the history of International Mother language Day and the contribution of Bangladesh in the International arena.

Air Vice Marshal Mohammad Mostafizur Rahman, Ambassador of Bangladesh to Indonesia has delivered his maiden speech as well as closing remarks. He recalled in his speech with profound respect all language martyrs who sacrificed their lives for establishing the right of mother language Bangla on 21 Feb 1952 including the Greatest Bengali of all times, Father of the Nation Bangabandhu Sheikh Mujibur Rahman who led the struggle for the dignity for the Bangla language Professor Shahbaz Khan, Director and Representative, UNESCO Office, Jakarta, Indonesia spoke on this highlighting the theme of this year declared by UNESCO.

Professor Dr. Imtiaz Ahmed, Professor of International Relations and Director, Centre for Genocide Studies. University of Dhaka, Bangladesh was the Keynote Speaker at this program.

In his keynote paper he highlighted the history of the creation of Bangladesh and the root of Bangla language with special emphasis on the language movement in 1952. Ambassador Mashfee Binte Shams, Secretary (East) Ministry of Foreign Affairs of Bangladesh, Arko Hananto Budiadi, Senior Diplomatic Staff, Directorate of South and Central Asian Affairs. Directorate General of Asia Pacific and African Affairs, Ministry of Foreign Affairs of Indonesia. Dr. Dora Amalia, Acting Head of Center for Language and Literature, Development and Preservation, Ministry of Education and Culture of Indonesia, Her Excellency Yasoja Gunasekara. The Ambassador of Sri Lanka to Indonesia. Faizullah Zaki Imbarhimi, The Ambassador of Afghanistan to Indonesia, Arief Rachman is the Executive Chairman of National Commission for UNESCO, Ministry of Education and Culture of Indonesia also presented their speech in this occasion.