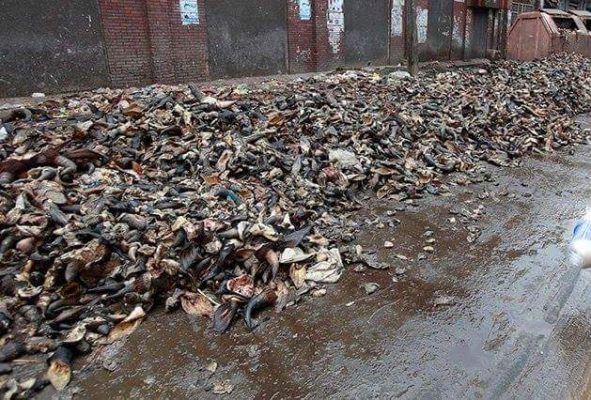 Khadiza Akter :: Eid al-Adha, the ‘Festival of Sacrifice’ is one of the two holiest events celebrated worldwide by Muslims each year. On Eid al-Adha, Muslims sacrifice animals (usually goats, sheep, cows, bulls, buffalo, and camels) as a symbolic observation of personal sacrifice.

Being the Muslim majority country, a lot of sacrificial animals are slaughtered in Bangladesh on this festive occasion, and Dhaka is always on top compared to other cities in Bangladesh. But due to the absence of a proper management system for slaughtering and disposal of slaughter waste, the city’s environment gets polluted during this religious festival each year that causes harm to the people as well.

Very recently, the Economist Intelligence Unit (EIU) has ranked Dhaka as the world’s second least livable city, only behind Damascus, the war-torn Syrian capital. ‘Culture and environment’ was one of the categories of scoring among the five categories by EIU in which Dhaka was rated 40.5 out of 100. About this, we have talked and made fun a lot through social media. But this ‘we’ are responsible for this rank of us. It’s good that no international agency is rating cities particularly on the basis of its ‘Eid al-Adha sacrificial animals’ slaughter waste management’. Otherwise, Dhaka may secure the first position in mismanagement.

Although there are instructions by both the city corporations of Dhaka on behalf of the government to slaughter sacrificial animals and dispose the waste at designated places in the run-up to the festival, we hardly follow that. We eschew the designated areas, prefer to make sacrifices in our garages or on the streets outside our houses, dump hazardous slaughter waste haphazardly on streets and drains, and result in environmental pollution and epidemic risk. But if we would follow the advice of authorities, it would easier to clean away blood and animal waste very quickly and keep the environment safe.

From the unplanned slaughter and disposal of slaughter waste of sacrificial animals, water, soil, air, and overall living environment of Dhaka become polluted severely during the Eid al-Adha festival. Now it is rainy days. A bit of rain can create the civic nightmare: the blend of blood and water is clogged on the streets and drains across Dhaka. Also, harmful microorganisms from slaughter waste can mix into soil and air, and all this can cause many infectious diseases in people. 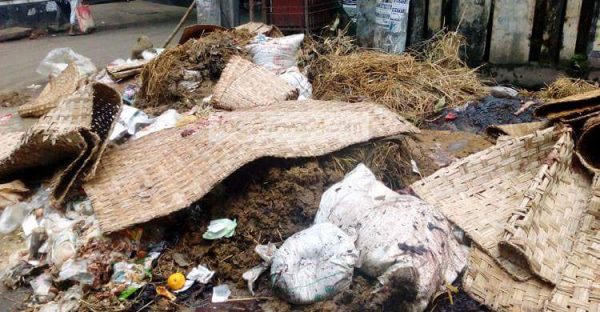 Rather, if we can upgrade our traditionally employed slaughter and waste disposal mechanism, we could save our environment as well as our lives. To do so, we must select designated places for slaughtering sacrificial animals, not dispose of slaughtering waste haphazardly, settle the skins of those animals as early as possible, clean up those places properly, and recycle and use sacrificial animals’ slaughter waste.

Around the world, many cities have designated places where trained people slaughter the sacrificial animals. So, the waste generated from the slaughtering of sacrificial animals could be managed properly that help not to be polluting environment and spreading diseases. Certainly, we can follow them.

Additionally, we can add value to Eid al-Adha sacrificial animals’ slaughter waste by quickly decomposing and converting it into rich organic manure that could be sold in the open market. As this waste would be collected every year, and the same dumping site could be used year on year, it would be a financially sustainable and profitable project, which will open a revenue stream for the government.

The government, therefore, must play the key role in encouraging people towards environment-friendly behavior during Eid al-Adha through formulating legislation, planning actions and strategies, engaging multi-level stakeholders, and outreaching. Along with the government, support by local authorities and civil societies, and positive media coverage should continue. At the same time, we all need to cooperate with city corporations to systematically dispose and treat the city’s hazardous slaughter waste during Eid al-Adha festival. It will mitigate the risk of environmental pollution and subsequent epidemic risk.

Islam has given special importance to cleanliness and Eid is the holy religious festival of Muslims. So Eid cannot be an occasion that creates pollution of the environment and harm to human being. It is time to relinquish the typical behavior of slaughtering the sacrificial animals and disposing of waste in an unplanned way, and seize the opportunity of using waste in a good manner. Only if we can adopt this responsible environment-friendly practice during Eid al-Adha and continue all the year round not only in Dhaka but all over Bangladesh, we could hope for a clean, safe and healthy country to live in. Let us attempt to celebrate Eid al-Adha in a decent way by embracing environmental-friendly sustainable practices.

Wishing you all an environmental-friendly Eid al-Adha. Eid Mubarak!