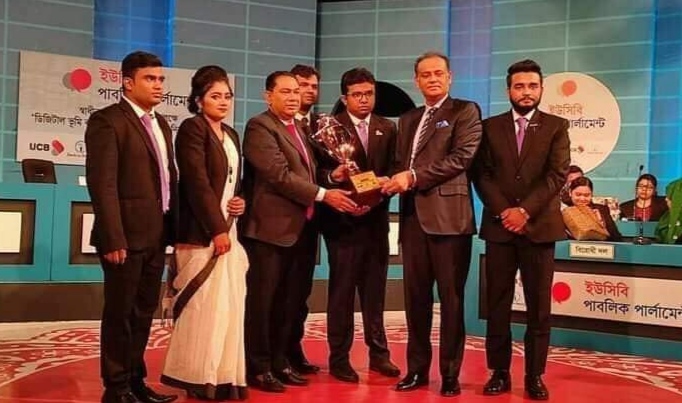 Zafor Ahmed Shimul, staff Reporter:: On the occasion of the golden jubilee of independence, ‘Public participation in digital land management is satisfactory ‘
Bangladesh University of Business and Technology (BUBT) has emerged as the runner-up where Dhaka International University (DIU) gained the position of champion,the UCB Shadow Parliament Debate Competition organized at the university level.

Hon’ble Land Minister Mr. Saifuzzaman Chowdhury was present as the Chief Guest at the function conducted by Hasan Ahmed Chowdhury Kiron, President of ‘Debate for Democracy’.

Among the winners, Azizur Rahman Bulbul (Team leader and Prime minister of the winning team), SM Al-Amin, law student and Shah-Alam, business administration student of Dhaka International University participated in this year’s debate competition. The other member of the party is Sapphire from the Department of Sociology.

Mr. Shah-Alam Chowdhury Himu, Additional Registrar, Dhaka International University, said in an exuberant voice, “Our contestants have once again proved their mettle through this victory. The love and passion for their debate and the mentality of healthy competition is actually the main reason for this success. I wish the DIU Debate Team will be continued with this success.

Congratulating the winning team, Dhaka International University Vice-Chancellor Prof Mr. Ganesh Chandra Saha said, “Our students have always been doing well in the field of debate. Even in the entire country, our university has been achieving such success in the national debate competition for many years. That’s the decent thing to do, and it should be continued over and over. “

EDUCO Warns: Children are the Worst Affected by the Latest Fire in Cox’s Bazar